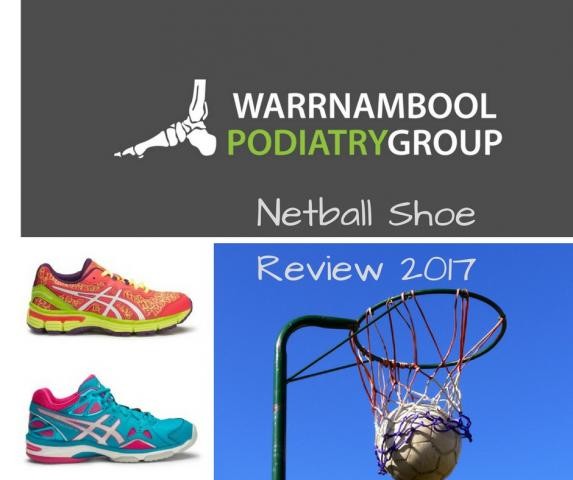 In the last few years there have been great advances in the design of netball shoes meaning they are now designed with very similar features and feel of a runner but with the added features lateral stability, more durable outsole and often a wraparound upper to help prevent those little toes coming through the outside of our shoes.

Netball is a fast and very dynamic sport that relies on players being able to change direction quickly.  These movements put considerable amounts of load on the feet and legs especially on asphalt courts. It is common for players to suffer foot and leg complaints such as blisters, arch pain, shin splints, knee pain, calf cramping and Achilles issues, in saying this it is common for any sports person to suffer from these complaints so the correct footwear for the correct activity can be a big part of that injury puzzle.

Netball shoes are designed differently to runners not just on the outer sole but with increased density in the midsole to increase lateral support. The lateral part of the shoe is the outside. Running shoes have softer foams here because when we run, we normally do so in a fairly straight line, without needing to push off the outside of our feet. Having that increased density in a netball shoe allows us to make quick and dynamic changes in directions faster since we have a more stable base to push off, our foot is less likely to roll over and become stuck in the softer foams of a running shoe.

So generally for players in the rings you will find they actually feel better playing in a netball shoe as it allows those quicker take off movements, where as a midcourt player may be more tempted to stay with a running shoe. The disadvantages of a running shoe when used for netball is obviously durability but also it does increase the risk of injury as there is much less lateral stability.

In saying that there is still a mix of different footwear across all netball courts. If you have a look at the feet of our diamonds netballers. Majority of the girls play in one of the Asics Netburner range, however midcourt player such as the Diamonds Kim Ravailion mixes it up by wearing a Nike Pegasus, a running shoe but has also been seen in the Netburner Super.  Vixens captain Kate Moloney sometimes wears an Asics nimbus and Liz Watson wears either the Asics 2000 or the Netburner Ballistic. Hence you can see there is a choice you can make, but in order to make the correct decision it is good to know what makes a netball shoe different to a runner and how this may change the way it feels and ultimately how you play.

Below is a snap shot of some of the Netball shoes we have looked over;

Neutral foot type, forefoot and heel cushioning, wrapped outsole for durability and a midfoot trussic for increased arch support. Most flexible and lightest weight of the netball shoes. Not suitable for those with ankle instability issues. Available in a high or low cut version for increased ankle support.

A neutral shoe that is designed to look and feel like a runner while still offering durability and lateral support of a netball shoe. More stable than the ballistic and with a slightly higher weight – but hardly that you would notice!

The widest fitting of the Asics Netburner range and with 3mm increased heel height, it may assist in reducing discomfort for the player that experiences trouble with calf soreness or occasional Achilles discomfort.

A neutral cross trainer, Brookes shoes can often suit a narrower foot type, which can make a huge difference if movement within the shoe is an issue – both for stability and blister development.

A cross trainer designed to have a dual density midsole similar to the Brookes Adrenaline running shoe. Lightweight and durable however depth of the shoe can be somewhat less to the Netburner range, so a lock lace may help if slipping is an issue.

Mizuno have also started stocking a netball range, in line with their other footwear options their range is very light weight which makes it a great option to compare to the Netburner professional, unfortunately these are not stocked locally at this stage, but are a great one to look out for in the seasons to come.

5 things you CAN do to help your Achilles pain!
AFL injuries are WINNING

No comments made yet. Be the first to submit a comment